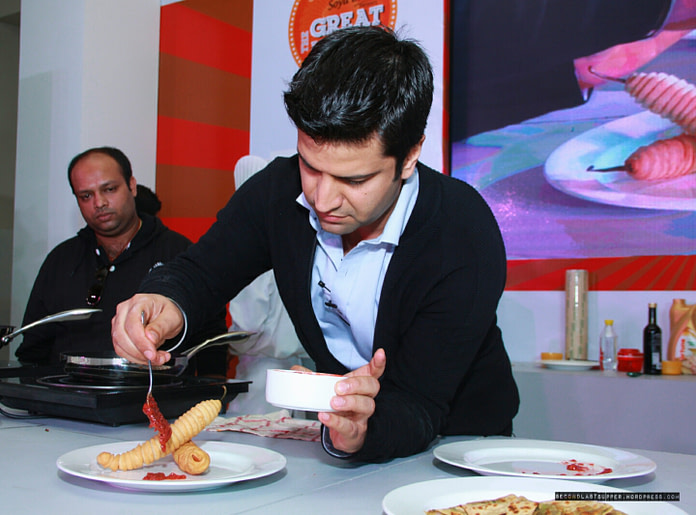 This is one of the biggest culinary events held in India, Last year being the very year of initiation more than 12000 people turned up in Bombay and the very same stellar success bought the event to the northern fooding frontier of New Delhi. Held at the 5 star property of The Grand hotel, Vasant Kunj on 22nd & 23rd November 2014 the event was a complete delight.

The event had multiple faces with number of events happening all in one go, On one end it was the master and celebrity chefs as Saby, Kunal Kapoor, Saransh Goila, Vicky Ratnani, Ajay Chopra and 12 others cooking right in front of our eyes to teach us how to get it right and master the tough looking dishes. I was lucky enough to see them right in front of me as most other times I saw them only over television where they seem out of reach but here it was one on one interactive session with every one of them.

Another angle was part fair and part exhibition of few big brands in culinary world today such as Tupperware, Fortune, Borges and Organic India to name a few. With a wide variety to choose from people had a lot to explore and experience here.

And keeping in mind the general mob of foodaholics there were some western world charms like Pizzas from Fat lulu’s and Bakes from Elma’s which have been a delight for Delhites for a substantial time now, not to disappoint the patriotic flare of Indian crowd we had some hits from Chandni chowk like Daulat ki chaat and parathas from parthe wali gali.

The whole event was very well planned but poorly marketed which resulted in a much lower turnout as compared to the one in Bombay but was still a great event to catch up with who’s who of the industry and have a relaxed weekend and this is the reason it would be held in Mumbai once again on the 7th & 8th of December this year only in expectation to take it a few notches above where it stood last year.