The Attar extraction in Hasayan The State of Uttar-Pradesh has earned a bad name for the past 2 decades, maybe due to the uncertainty of dirty politics and bad infrastructure but there is sure lot more to be offered; Infact,me being someone, who was born & raised here, cannot let go of the classic charm this place exudes. The place is so culturally rich that every few miles you find people involved in something new or being clung to a classic art or move that they have lived by for decades just for the simple belief that they are the torch bearers for it.

I was lucky to have earned an invitation by someone close to observe the Rose-attar making process, where attar making in itself is something of a dying-art, which remains closely limited in the hand of few Muslim families belonging to the region of Kannauj; They are the only ones who do it in the most traditional ways. The best grade of Pink rose happens to grow around the area of Hathras where the small farmers collaborate with each other and sell it off to larger vendors, who later sell it to Attar makers every morning around 5 am.

I was in a particular area which goes by the name of Hasayan and is considered to be outskirts of Hathras. It is a sight to see truck loads of rose coming here early morning, for around a month without fail. Every broker haggles over the price and honestly everyone gains different money as per the demand, although the difference is negligible. The next stage is of pouring about 60 Kilograms on flower in a big vessel which carries little water as base just to avoid the flowers getting smoked.

The interesting part is when the roses are cooked for consistently about 3 hours they release vapours of fresh unadulterated essence, which gets transferred to another smaller vessel which is submerged inside a pond and every single vessel has a dedicated person which keeps rubbing it from sides consistently just to keep it cool; If they don’t rub it, the temperature would eventually rise in the vessel which would delay the settling process of fumes inside.

Once the smaller vessel is rubbed for 3 hours it is taken out of pond, sealed with rope kept aside till the evening, once the complete liquid is stagnant there is a small bolt at the bottom which is released to let the water at base flow out, which is collected separately and can be reused with a fresh lot of flowers. Once the attar is cool and separated, this process is repeated 2 more times with lesser and lesser amount of water at base, which finally gets reduced to about 7 grams of pure rooh gulab attar out of 60KG of flowers. This sells in the market for about 6-7 lakh INR/ltr and this is the purest possible form of Rose extraction you could lay your hands on. A slightly diluted form of rooh goes by name of Gulab/rose attar and sells for about 1 lakh INR/ltr.

The place does not have much to offer except the interesting process of attar making which is seasonal, after about six months Khus goes through a similar process to get extracted from the Khas-grass, If you happen to be here anytime, just remember to carry your own food and water as this is something not easy to locate once you reach the exact spot. 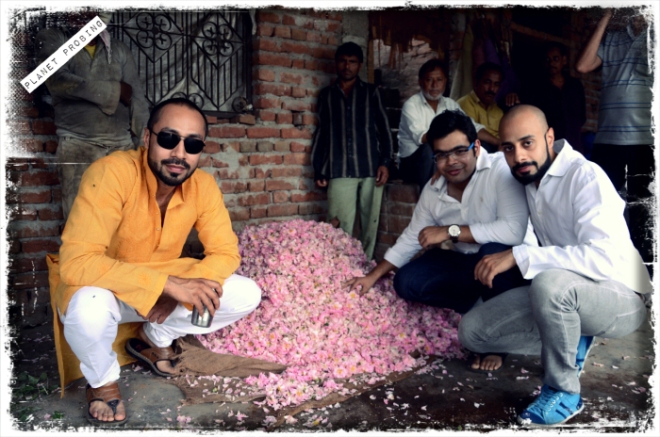 8 thoughts on “The Attar extraction in Hasayan”